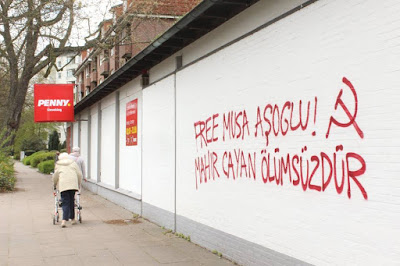 
Musa Asoglu - allegedly the leadership of the Turkish Revolutionary People's Liberation Party - Front (DHKP-C) - was arrested in Hamburg in December last year. Both the Turkish state and the USA exposed a bounty on him of $ 1.2 million and $ 3 million respectively.

Since then, a struggle for his extradition has been raging, since both Germany, Turkey and the USA want to convict him.

He is held responsible for attacks on the American Embassy in Turkey and further attacks against the
institutions of US imperialism. The DHKP-C is leading the revolutionary war for power in Turkey for the workers and peasants of the country. It is fighting against the Turkish state and imperialism. It fights the dealers, who are tolerated by the state to poison the masses and attack revolutionaries. It agitates for communism. It stuggles for communism. The DHKP-C is a shining example of which all revolutionaries around the world can learn.

The accusation of being part of or even leading them is not an denouncement. It is an honor.
The German state and the Turkish state are our enemies. This has once again beed proven. It is time that we treat them accordingly.
For this reason Graffitis were put up in Bremen, Hamburg, Jena and Weimar in solidarity with Musa Asoglu. We say:
It is right to rebel!


The struggle against the Turkish state is legitimate and necessary!


Freedom for Musa Asoglu and all other captured revolutionaries!