8th Conference of the CPG (m-l)

Let’s chart our own path
For the reconstruction of the working class, revolutionary, and communist movement
Main Political Event
Friday 24 April 2015 7:30 pm
ASOEE Building
We announce that on 24, 25 and 26 of April 2015 the 8th Conference of the Communist Party of Greece (marxist – leninist) will convene in Athens. On the following few days the internal process of discussion on its theses will be concluded and the elections of representatives from all regional chapters will take place. The 8th Conference takes place in a period when old and new political and social problems in Greece are presented in a more complex form.

After two years (2010-2011) of intense popular and workers’ struggles against an unprecedented capitalist-imperialist attack, we are now in a protracted phase of setback of the popular movement. For this setback a great part of responsibility falls on the leaderships of the reformist forces who have managed to turn popular consciousness towards electoral illusions and parliamentary self-deceptions. It is now obvious that the new coalition government of SYRIZA and the right nationalistic party of ANEL, despite its bombastic rhetoric and promises, follows the same path.
This is the path of submission to the policies and interests of big capital and imperialism, inside the framework of NATO, EU, Eurozone, and all the international commitments of Greece. These days the new government is negotiating the imposition of new anti-popular measures, privatizations, and austerity so the financing of the banking system by the foreign exploiters can continue. It will not be long for the popular and workers” movement to rise up again in a new round of social struggles against capitalist and imperialist barbarity.
The CPG (m-l) all these tough years has tried tirelessly to open the road for a genuine revolutionary way out. We have striven to build a broad Resistance Front, to organize a Left – Antiimperialist Coalition, to fight against electoral illusions and every kind of reformism and opportunism. We will continue these efforts under the new conditions. Our 8th Party Conference will try to elaborate on the current situation and the entailing tasks. At the same time it will formulate more specifically its proposition for a Resistance, Claiming and Overthrow Front. It will analyze deeper the preconditions and the possibilities for a genuine revolutionary road for the popular masses and the working class in Greece, with Independence and Socialism in its perspective.
Pubblicato da maoist a 15:39 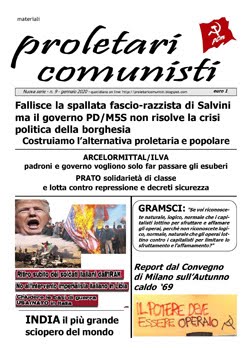