in via di traduzione da Incendiary

The impeachment inquiry launched in September by Democrats has transitioned to an impending impeachment trial after the House of Representatives passed two articles of impeachment against US President Donald Trump yesterday. As the third impeachment in US history, the process continues to demonstrate to the public the political bankruptcy of both bourgeois parties, who can only serve the elite ruling class. 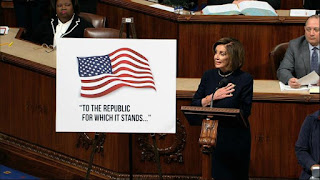 Passing almost exactly along party lines, impeachment came to a vote so quickly because Democrats are eager to keep the proceedings in-step with the upcoming 2020 election year. The articles accuse Trump of abusing the power of his office and obstructing the investigation into his misconduct, but the outcome of the next election has been the obvious prize of this partisan contest.

US bourgeois politics thrive on identity-based, partisan politics which erode any actual political positions, covering the horrible essence of both parties which can only be described as rightwing. The  majority of people in the US already abstain from voting, because they see through this sham. The disagreements of the Democrats and Republicans are based on party affiliation, while they agree to keep private property sacred and plunder the whole world for labor and resources.
Different stages of the impeachment process have seen different camps of US imperialism enter the ring to outflank each other. During the televised Intelligence Committee hearings, US foreign policy towards Europe and Russia took the spotlight, but as things have progressed, the process has taken on a theatrical character as a competition to see who can be the biggest jingoist.
While speaker of the House Nancy Pelosi opened the debate about the articles of impeachment next to a poster of the US flag and recited the pledge of allegiance, Republicans have taken to comparing Trump to Jesus and his impeachment to the attack on Pearl Harbor. Even more concerning than these theatrics is the very real gestures toward fascism. 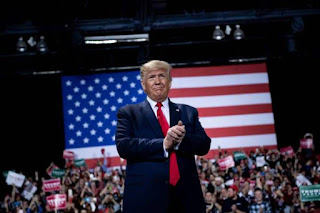 While Trump and his cohorts publicly blame the “far-left” and “socialists,” the Democratic Party stooges try everything they can to prove that they are neither leftwing nor socialist. Both groups focus  their propaganda on trying to outdo the other in terms of aggressive US imperialism.

Turning to blame socialism in the total absence of real socialists is a particularly dangerous gesture intended to once again mobilize Trump’s reactionary and fascist support base. By seemingly opposing Trump, and for the sake of appearances, the Democrats hope to endear themselves to the population who has grown sick of their posturing and been crushed time and time again under their boots in the form of their policies that enforce bourgeois rule. The Democrats do so to legitimize the business-as-usual perspective of imperialism and to regain control over their own base.

The so-called “socialists” that Trump and company speak of are little more than servants of the Democratic Party, which only panders to phony socialism in times of crisis to legitimize itself. Both Republican and Democratic propaganda around the impeachment signal a step to the right respectively and both use it to attack the emerging popularity of further left politics.

US imperialism has entered deepening and worsening crisis, a crisis that has driven both bourgeois parties further to the right. This has been an ongoing trend masked under the liberal “lesser of two evils” attitude toward voting in major elections. While this has not increased voter participation among the masses, it has given cover to the rightward trajectory of US imperialism as a whole, which is shedding its democratic mask bit by bit. All this points toward rising fascism.

US-POLITICS-TRUMP
Trump at Michigan rally same day that impeachment articles were passed.
Before the day of the vote, Trump submitted an open letter to Pelosi, in which he accused her of “declaring open war on American Democracy.”
“You dare to invoke the Founding Fathers in pursuit of this election-nullification scheme,” the letter reads, “yet your spiteful actions display unfettered contempt for America’s founding and your egregious conduct threatens to destroy that which our Founders pledged their very lives to build.”

As if responding to the letter, Pelosi fired back later that day. “Our Founders’ vision of a republic is under threat from actions from the White House,” she said. “If we do not act now, we would be derelict in our duty. It is tragic that the president’s reckless actions make impeachment necessary. He gave us no choice.”

In appearance Trump and Pelosi have different conceptions of democracy, but both agree to the false democracy of the rich and a lack of democratic rights for the poor.

Whether the Democrats or the Republicans are in power does nothing to change the conditions from which US imperialism has developed, lending a rotten foundation to any semblance of democratic rights. The “founders” of the US, of whom both parties speak, helped to conduct genocide, held slaves, and mercilessly exploited the toiling masses. People who find this acceptable will no doubt be seen as qualified for administering rule of the US government by the imperialists, who to this day continue on in their merciless exploitation and oppression of working people within the US as well as the majority of the world.

Both Pelosi and Trump’s patriotic pandering to the “founders” is reactionary theater, a tone deaf attempt to win the confidence of people who in growing numbers are sickened with everything behind the founding of “America” as well as the relationships that shape US society today. The people of the country, especially the young, have begun to see through the American myths which the bourgeois politicians cling too so desperately in an attempt to outbid one another. The current generation is emerging from the haze of anti-communism and is more than ever willing to struggle for socialism. Both political parties are deaf to this fact and continue speaking mainly to themselves.

Now that the articles of impeachment have passed in the House, they are set to go to the Senate which will conduct the actual trial. Senate leader Mitch McConnell has stated that he does not wish to honor Democrats’ requests to call more witnesses, but on Wednesday Pelosi said that the House would withhold sending the articles until McConnell compromises on the terms of the trial.

Even though officially impeached, Trump is likely to continue serving his term. At best it will hamper his chances at a second term, which only means that the next ruling class despot will likely be more verbally reserved and not as bombastic, but he or she will most certainly be a die-hard imperialist, just like Trump and Obama before him.

The quality of life and the political agency of the people in the US will still decline under whoever is elected as president. US imperialism is not impeachable, and it is the true enemy of the world’s people. As both parties shift to the right, and Trump once again shows his willingness to mobilize his fascist dogs, the only thing to do is to cast aside illusions and prepare for struggle.

As the parties continue to bicker, the invocations of “democracy” ring more hollow. The thing is to expose this before the masses, to discredit the notions that Trump is a deity or that the Democrats are “saving America.” Conditions have never been so good for revolution in this country, nor have the masses faced such a threat as the cornered and desperate US imperialist beast.

This means taking serious the fascist menace among the people and in the government. It means teaching one another about the lack of real democracy in the US, by turning the passive abstinence from voting into an active political boycott of the elections, insisting that voting only offers life support to doomed imperialism. More than anything else, it means coming together, uniting against the imperialist ruling class which thrusts the world into chaos and shambles. It means looking to a society far beyond this one and the imagination and willingness to fight for it.
Pubblicato da maoist a 06:12