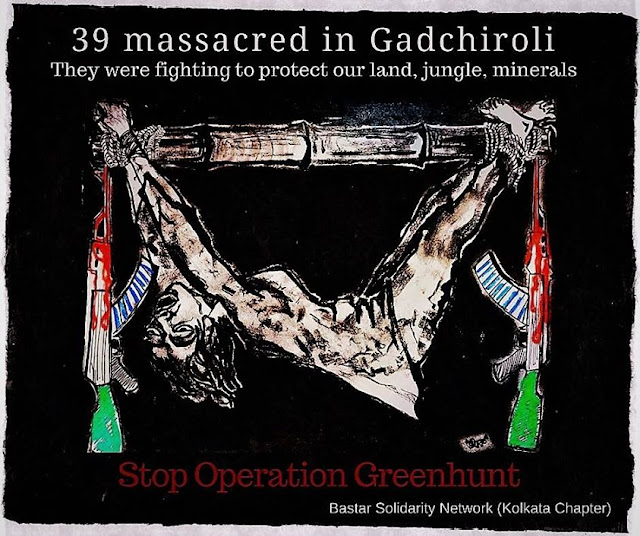 The Indian state’s war on its most impoverished and marginalized populace in the form of Operation Green Hunt is now continuing for almost a decade killing hundreds of Adivasis in the vast forest areas of Chhattisgarh, Jharkhand, Odisha, Maharastra, Andhra Pradesh, Telengana and Bengal. Initiated by the former UPA government, the operation reached a new height in terms of violence and brutality during the rule of present communal fascist government led by BJP. The intensity of the war
has escalated in leaps and bounds with the declaration of the present government to “flush out” the Maoists before 2021.
In the recent incident in Gadchiroli district of Maharashtra, at least 39 Maoist activists are reported to be killed by the security forces in two different “encounters”, while there is no casualty on the other side. The first encounter took place near Kasansur village in Tadgaon Police station area of Gadchiroli. The Maoist activists went to the village to attend a wedding ceremony, the police surrounded them while having the breakfast and killed 31 of them. Although the police claimed it to be a gun battle between the two sides, some important questions remain unanswered, as in a gun battle one side lost 31 people and the other side remained unharmed.
According to the police, the second “encounter” took place at Nainer forest near Rajaram Khandla in Aheri taluka, but local tribals failed to recall hearing that many gunshots. The Times of India reports,
“Though senior officers claimed it was a genuine gun battle, there are speculations about it in the hamlets surrounding Nainer. TOI on a visit in the remote region met tribals of Nainer and eight hamlets in a range of five kilometres. Starting from Rajaram Khandla, TOI visited Korepalli, Kapevancha, Korchepalli before taking a U-turn for Pallekasa, Madgu and Nainer passing through the forest trails.
A family at Kopevancha claimed to have heard only couple of gunshots. Another prominent tribal of that hamlet also said he could not recall hearing continuous bullet shots in the forest. Police have claimed they came under “heavy and indiscriminate fire” from Naxalites.
A villager from Pallekasa said he spotted a police vehicle pass through but returning soon. “I had seen the vehicle go but it did not leave the village. We heard that there were bodies in the vehicle,” he said.”
Killing the political activists and dissenting voices in staged encounters is nothing new in India, the Indian state has always openly sided with the corporate capitalists in waging war on its people. The state and central government act as active henchmen of the corporates to facilitate land grab and mineral loot destroying the lives of thousands of Adivasis. In this process they are determined to suppress all the resistance movements and Operation Green Hunt is their license to kill the Adivasis who oppose the unjust development process, protest the state oppression and are determined to protect their ancestral heritages. Clearly, the Indian state sees the Maoists as a severe threat to the investment climate rather than a security threat to the nation.
Bastar Solidarity Network (Kolkata Chapter) condemns this mass killing in Gadchiroli and demands judicial probe of the incident. We appeal to all the democratic individuals and organisations to join hand against this vicious design and build resistance against Indian state’s war on people.