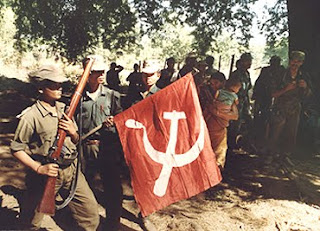 
In India an impetuous people's war against the Indian bourgeoisie and the
imperialism is developing and spreading more and more in nearly one third of
the districts of the country. It is not simply a guerilla waged by few
thousands of fighters, coming from the castes and tribal areas of the
country. It is a real people's war, led by the Party of the proletariat of
India, the Communist Party of India (Maoist), in which are involved - or is
supported by - millions of poor peasants, women, "untouchables," fighting to
free themselves and it has already took big areas throughout a dozen of
states of the Indian Federation.

The people's war began where the root of the riot, the poverty, the tribal
and capitalistic exploitation, the caste oppression, the plundering of the
natural resources were deeper and therefore the contradictions brought by
the Indian capitalism ruled by the imperialism were sharper. Today this
people's war is winning masses of young people, students, democratic and
revolutionary intellectuals also in the cities and gains attention and
support over the world.

Against the people's war, the Indian State, supported by the imperialists,
launched a giant repressive offensive called "Green Hunt," a real manhunt
that hits the poor masses in India as animals to exterminate. The Indian
State launched an internal military offensive against the people, waged by
hi-tech-armed troops, police units and paramilitary militias, in order to
spread terror and genocide in the villages, with raids, crop destroying,
massive rapes and killings, selective murders, mass detentions and
disappearing - like the recent genocide offensive occurred in Sri Lanka
against the Tamil people and liberation movement.

All this with the illusion to drown in blood the struggle of the people for
their liberation, with the silent/consent of the imperialist governments of
US, Europe, Russia, and their mass-media. The crimes of the Indian State
found the internal opposition of a wide front of intellectuals - including
the prominent representative of the world anti-globalization movement, the
writer Arundhati Roy. And in all countries of the world political activists
denounced those crimes and mobilized to stop "Green Hunt."

A world campaign of information and solidarity has been launched by ICAWPI
(International Campaign Against War on the People in India). But we need
more than the condemnation of the crimes of the counter-revolution in India.
The masses led by the Communist Party of India (Maoist) are writing a
historical chapter of the class clash in the world between, on one side, the
imperialism and the reactionary bourgeoisies and, on the other side, the
proletariat and the people of the world. The development of the people's war
in India is a new proof that the revolution is the main tendency in the
world today.

It shows again that Maoism, the Marxism-Leninism of our era, is the command
and guide of the world revolution against the imperialism in crisis.

The vanguard proletarians must understand that the advance of the people's
war in India seriously questions the strength balance, not only in the
South-Asian region but also on a world scale. That is why we, Maoist and
revolutionary parties and organizations, launch a big campaign of support
and call to form an International Committee of Support to organize
conferences, meetings, demonstrations in various countries, particularly in
the heart of the imperialist beast.

With people's war in India towards the victory!